I’ve struggled a lot with binge eating without purging and emotional eating and Christmas for me is a big trigger as its an excuse to binge eat/overeat and binge drink too and generally just do everything to excess.

Last year I used ‘oh its ok its December’ as an excuse to binge eat and I found it really hard to stop and put on about a stone which I’ve not been able to shift this year.

I’ve been super aware of that this year as we hurtled into December and I’ve had much more of an awareness how much I’m eating, because I eat to the point I feel sick and my stomach hurts for days because it gets so bloated and I feel so sluggish and gross.

I’m super proud that I’ve been able to really stop, think and look at these excuses and behaviours and catch myself before I eat when I’m not hungry and try and figure out what it is I actually need instead. It’s usually an emotion that’s been left unnoticed, like if I’m feeling sad, or I need to feel comforted etc, so instead of eating to temporarily fill those feelings, I try and do a bit of self care instead, redirect my concentration.

If I feel like I need comforting then I fully recline my sofa, cover it with blankets and pillows, get a drink and small snack and chill out on the sofa with a favourite film and maybe message friends, use my fidget toys and chewigem to redirect my concentration. And things like this have been really helpful to help me deal with the urges to just eat everything in sight, which never ends well, it makes me feel much worse then if I was just to take a moment to sit and ask myself what do I actually need right here in this moment.

I’ve really learnt this year to really look at my actions, feelings, emotions etc and instead of mindlessly just do things based on how I feel, I’ve been looking at what my brain is trying to tell me it needs. It is a bit like trying to decipher a code that I didn’t write lol and its hard work and frustrating but it has definitely been worth the work.

I’ve still had a few days where I have eaten a bit too much but it hasn’t been to the degree where I felt sick after, I’ve been able to control it much better.

Hopefully I can continue to keep on top of my binge eating and maybe even shift a few pounds too. But even if I have times where I don’t that’s ok too, I can always start over again.

Just to finish off with as this just popped into my head, but I’m not great at trying new food, even new drinks because it causes me a lot of stress and anxiety. But my mum bought me a Pukka tea advent calendar and at first I was really apprehensive and nervous about trying them, especially ones I’ve never tried before which is the majority of them.

So everyday when I get one I don’t think I’ll like, or I’m unsure about trying, I try and put those anxieties and thoughts aside and just sit and be in that moment and not judge it until I’ve had a few sips of tea before I decide I don’t like it and its really worked, there’s not been one yet that I haven’t liked or haven’t drunk. I mean there are one that I prefer over others but I think that’s pretty normal. I am pretty proud of myself for trying something new everyday, its a pretty big deal for me. I am definitely getting better at trying new food and drink but it does have to be under the right circumstances, like I can’t be super anxious or stressed or I won’t try it/won’t enjoy the experience. I have to be relaxed and opened to it.

Yeah man I am destroying these old fears/traumas! I am kicking butt!

I really want to decorate and replace most of my furniture.

I really want to create a cozy, safe spot space.

I know how to re-decorate and I have a vision of how I want it to look, but I’m scared I’d mess it all up. Which is so stupid.

My fear of messing up stops me doing so much. It physically holds me in place, so I can’t move. I then just get stuck in a vortex of negative thoughts and it just perpetuates the fear and anxiety.

I’m so trapped inside myself, I can’t find my way out of my head. It’s so frustrating, I could be so much better then I am. But I’m scared to try, I hold myself back and hold everything in. Making myself invisible, so I’m not seen.

I suppose it’s because I feel so unworthy, sometimes I even feel unworthy of being alive, like I’d happily swap places with someone who would benefit the world, even if it meant I wasn’t here anymore. I dunno if other people have felt the same or just me.

I’ve tired so hard to change over the years, it’s so exhausting. I keep thinking maybe this is just me, I can’t change, I just have to deal with this darkness forever. M

I feel like everyone grew up and moved on without me, I just can’t figure out how to do that. I must be stupid if everyone else can figure stuff out but not me.

My soul is so tired, filled with more darkness then light. Maybe one day I’ll figure stuff out and start stepping into the light, but for now I’m just drowning in the darkness, trying to grasp the thin rays of light.

Today has been long. But I will start with last night

Last night I had a really good bed time routine. I think I might try and do this every night. Before taking foxy for a wee, I put on my heating in the bedroom, made up my hot water bottle, put on the ps3 and TV, put on my little lamp, put my tab on my bed. Then I put on the shower and heater and shut the bathroom door. Got my clothes ready for the morning. Then I took foxy for a wee, I got back and put my fresh bed sheets on (obviously not going to do that every night) then did 50 sit ups and finally had a nice relaxing shower with my baby lavender wash, put on fresh pjs and took my meds and got into bed with my foxy pup. Put on top cat film and led down facing the wall and I pretty much fell asleep straight away 🙂 So proud of myself, I didn’t feel scared at all.

I woke up about 7:30 am, my mate came home after I had showered and got dressed, so I had a word with him about showering before getting into bed, I know he works hard and he’s tired, but at the end of the day this is my flat! He needs to sort out a new place to stay. Anyway I had breakfast and chilled out for a bit, I then had to round up Gizmo and put him in the carry box. It was easier then I thought as he cornered himself up on the kitchen side. He went in the box without much fuss, until I decided to feed the others before I left, he then went mad trying to get out lol. We got a taxi up to the vets as it was so cold out bless him and I got the bus home. I got in and fell back to sleep for a few hours, it was really needed.

My CPN rang this afternoon to arrange our next appointment which is tomorrow, she was very apologetic for not ringing me sooner, but it was cool, I haven’t got much planned atm, as I’ve not been feeling well.

I then had a phone call from the vets to say Gizmo was totally fine and I could go pick him up later. So happy I had some lunch and chilled out. Asked my bro if he could take me to go get Gizmo and he said yes 🙂 didn’t really want to go back out in the cold again.

My bro came and picked me and and we went and got my boy! Oh I missed him so so much! The vet said he’s really healthy and a whopping 3.4k! and he’s not even a year old yet. He behaved himself, she said he spent most of the time hiding under his blankie! Too cute! Then my brother dropped us back. Gizmo darted out of the box and behind the sofa, but I put the pouch of wet food the vet gave me into his bowl and he shot out like a rocket and stuffed his face! I think he was hungry lol. Poor boy wouldn’t come near me, but I don’t blame him.

Then I worked out if I could afford to get Dexter season 8 🙂 so I went to Asda and they didn’t have it. So I went into town to HMV to get it! Very happy tank girl. Then I nipped into see S and we ended up going out for dinner. I didn’t really enjoy mine as I felt sick and dizzy.

Just been relaxing this evening, not been feeling too great! IBS has been awful all day and I’ve been feeling sick and dizzy most of it. Nipped to Asda and got myself some ginger biscuits to help with feeling sick. It’s the 1st time today I have felt well enough to go online properly.

OMG just remembered something funny that happened today… the L.A fitness people asked me if I wanted to join the gym…me dressed up in my batman hoodie and cap said, I’m batman I don’t need the gym! he did not know what to say! HA! Then some mom said to her son, “look theirs batman” the kid clocked me and I waved and said hello, his mouth just dropped and was like wow! Aww so cute! 🙂 made my day. 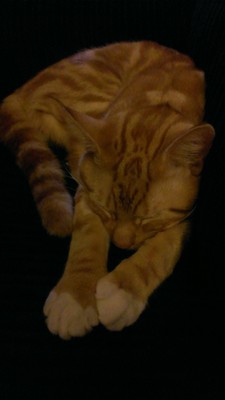 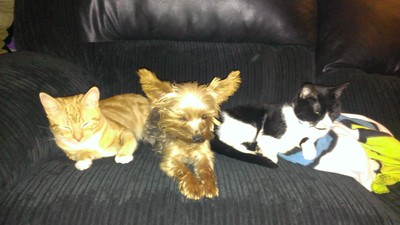