The dogs had the vets this week and we were made to stand outside in the cold, everyone else were sitting in their cars but I don’t drive and then I couldn’t go in with them. This made me super angry and not because I couldn’t go in with because I knew they would be fine but it was the fact that my social interaction was completely taken away from me, I’ve gone months without seeing a single soul and can do that even before this virus situation and for me that small social interaction is so important and can make a huge difference to how I feel that day.

Unless you’ve suffered with chronic isolation, I think its maybe hard to understand why it was such a hit to me. But yeah it made me feel so sad that something I was looking forward to was taken away from me, I really needed that social interaction, no matter how brief it may have been. Plus it’s always really nice to be told your dogs are happy and healthy and your doing a great job, but I didn’t get anything. It was all so cold, distant and not particularly friendly, which they usually are.

So this week I decided to go into a few shops in town, just to be around humans and not hold up on my own, talked to a few people in the shops. It was also helpful to help me get through this agoraphobia that’s developed over lockdown.

Lockdown has shown me how much I take for granted, even down to the smallest things. I didn’t even really realise how important these small interactions were to me, until I couldn’t do them anymore. But hopefully in the next few months things will slowly start getting better.

Am I the only one who when I am with people will put my phone in my pocket and leave it there, checking it very occasionally.

I had two friends down to stay with me and I felt so fucking awkward, lonely and left out.

They both spent 99% of the time on their phones, they were chatting with other people, playing stupid fucking games and just sitting there in silence… like wtf?! One of my friends even sent me a couple of stupid memes… like wtf I’m in the same fucking room as me! Show me! Don’t fucking text it!

I felt so fucking awkward, I’m not feeling my best as it is and I just didn’t have the energy to keep starting conversations… cuz they just died off anyway, I felt like I was interrupting and I was just in the way in my own fucking house!

We went out yesterday and on the way back not one of them said a word to me! They were just sat there on their phones talking to each other!

So today I didn’t even try, I just wanted them to go, I was so fucking done!

Yes they had bought me dinner but I don’t want or need things bought for me, I got my own fucking money. All I wanted was some quality time with friends… not too much to ask for? Right? But clearly it was.

I’m so fucking angry and upset! I deleted every single person off my FB! I’m fucking done with people! They wanna be friends fucking prove it!

I’m sick to death of trying to keep friendships going, I’m done! I don’t fucking care anymore! People are so selfish and self involved.

Yes we all got issues but fuck! Sitting on your phone whilst in the company of others is so fucking rude!

I’m so lonely, but I’d rather be on my own then be with people who make me feel alone.

One of them clearly didn’t like what I had to say about how they made me feel so I got blocked on social media’s! Fucking pathetic! Truth hurts!

I’m so tired of crying all the time, I’m just tired… I’m trying so hard to keep going and keeping my shit together but it’s exhausting. I’m tired of pretending to be ok, I have to be ok… no one else is here to help.

I hate today, it’s a total fucking write off and I cannot wait to get into bed.

My alarm went of at 7 am, as I needed to be in Bournemouth by 10 am. I did my morning stuff to get myself ready to go out and by 8 am my day was totally fucking ruined, by yet another fucking dog walker that doesn’t have a clue about dog behaviour.

This is my FB status I posted this morning, to explain what happened.

I’m really starting to fucking hate taking the pups out and not because of their behaviour but the absolute cunts we come across! Some fucking cunt this morning pushed foxy away from her fucking huge Labrador! Because foxy was barking at him, she wasn’t being aggressive in the slightest, she was wagging her tail wanting to play with him and scrappy was trying to play too. But no apparently my two massive aggressive dogs shouldn’t be off a fucking lead if I can’t control them! No my dog’s aren’t perfect, but my dog’s did fucking nothing other than doing what normal dog’s do. I’m fucking so fucking angry. The fact that she pushed my tiny 3kg dog away like she was about to fucking attack her! Fucking stupid fucking cunt!! I’m shaking I’m so angry!

Yeah I was insanely crazy! How dare she touch my dog like that! It took everything I had not to say anything and not to punch her in the face because that’s all I wanted to do.

So yeah this pretty set me up for a bad day, I just couldn’t let go of this anger and I’m still feeling a bit angry now.

I left the flat at 8:50 am to go get the bus and for some reason poor Foxy was shaking when I left, maybe she picked up on my anger. Anyway I got to the bus station and the first bus that was going to where I needed to be, pulled up but left straight away…Yeah helpful! Then the second bus didn’t even turn up. So I had to hop on a bus that was going near where I needed to get off but not down to exact road like the other buses. By the time the bus left it was half past 9 am and we got stuck in traffic on a roundabout for ages, by the time we got not even half way it was was 9:50 am! So I decided to get off the bus, I didn’t want to walk into a classroom full of people I don’t know being really late! I hate being late with an absolute passion! All this made me even more fucking angry, so it was definitely best I didn’t go because I just wouldn’t be in the right place to get anything from it.

When I got off the bus, I went and had a look in a couple of shops that aren’t in town and don’t go to often. I bought scrappy a new wishbone shaped Kony toy to keep him busy while I’m out.

Got home, played with the pups and gave scrappy his new toy, which he really loved and I knew he would, my boy is all about treats! I rang up the Department of Work and Pensions and started my new claim for Personal Independent Payment, which will take over from my Disability Living Allowance, so they will send me out a form for me to fill in and send back. That is one massive weight off my mind because it’s started now.

Had a nap because I was so other with the day already. I couldn’t do anything else, just needed some time out.

I needed a few bits from the shop, but I ended up coming out with a load of Halloween stuff too. I’ve decided to dress up as Dracula 🙂 I’ve got a cape, make-up blood, fangs and I’ve seen a t-shirt that looks like a shirt that Dracula wears under his cape, so I’m going to order that next week. I need to get myself a fake cane as well. Shopping for Halloween stuff made me feel a bit better.

I was feeling a bit restless and wanted to go and walk the dogs. But I didn’t want to go where we usually do, as it’s busy and I wasn’t in the mood to be dealing with people. Instead I took the dogs up to the heath, where I grew up and it was really nice. Only came across one other dog and dog walker but we saw a few cyclists. It was just so nice to be up and away from the general population of people, just me and the dogs in the sunshine on the heathland 🙂 just what we all needed. I took some really nice pictures too.

I did have a plan this evening and that was to have dinner, do online stuff and clean up. But instead I had dinner, caught up on my online stuff and the cleaning can wait. It’s not that untidy today because I’ve been really keeping on top of the housework because it does effect my mood when its messy. It can wait until Friday when I have a full free day.

Here are some pictures from today 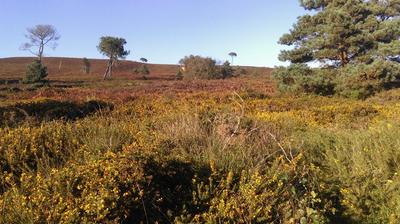 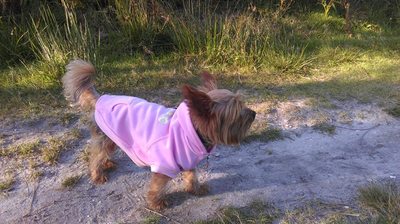 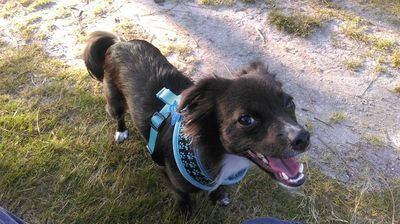 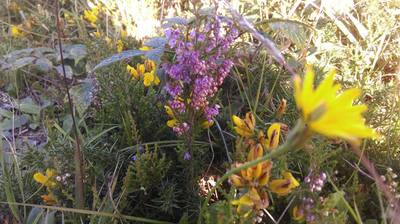 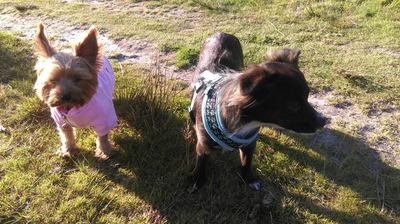 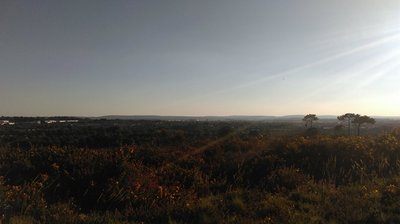 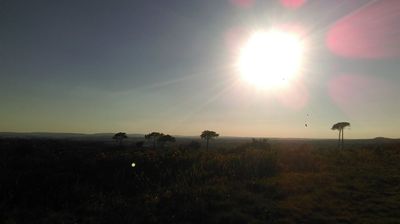 To start I am so glad I have changed my dependant behaviour.

Facebook status from earlier today – Applies to here too. If you continually put depressing woe is me statues up every single day! And do NOTHING to improve yourself or the situations, don’t be surprised if you no longer find yourself on my friends list. So frustrating to watch and listen to, especially when the people involved refuse to heed your help and advice, yet always seek help and advice! Attention seeking springs to mind. If this offends you then you clearly are guilty of this!

And yes if you are thinking that I sound like I am in a bad mood, then you will be right! I make no excuses for what I say. FED UP right now. I only want positive people around me, I know like me having a bad day right now is fine. There’s a difference in having a bad day and continually moaning about the same old crap and not doing anything about it is a BIG difference.

Hair is getting long and pissing me off! But I want a different style! But not sure what I want… Hmmm

I was up 1min before my alarm this morning….I felt like I had slept through my alarm and thought it was loads later then 9:19am… I thought it was about 11 am. I think it was because I had a bit of a restless nights sleep. So got up and did the usual morning things.

While the weather was ok foxy and I went out for a walk. It was nice, but we were only out about an hour. And I am glad too because from the shore you could see the rain coming in.

Got back and had lunch and have just sat and watched T.V all afternoon. Oh and did some planking too. Just going to plank as much as I can.

Feeling frustrated, a bit depressed….Just MEH! I need to do more during the day. I am bored. Bored of doing the same shit. Bored of being alone all the time. I love going for walks with foxy, because we get to talk to other dog walkers…if they are happy…not all are, anyway I love that. I NEED to do more.