I had a weird experience on Saturday, I took the train into the next seaside town with my dogs and we spent the afternoon there. I was really nice, beautiful blue skies, the sun was shining and the dogs had fun playing on the beach with the other dogs.

We had a walk through the town as I wanted to go into my favourite Fossil shop. But as I was standing outside just putting my mask on a girl came up to me and asked me if I had gone to Ashdown (my secondary school) to which I replied yes. I could tell she was nervous as she was talking to me, she didn’t say who she was. It caught me totally off guard and I didn’t recognise her at all, no idea who she was.

I find this type of situation difficult because its embarrassing, awkward and kind of makes me feel vulnerable because I hated school and I didn’t really have many friends and also back then I was presenting in my birth gender. Which isn’t me, its never been who I am and yeah it makes me feel like oh well if I’m still recognisable by someone who’s not seen my in nearly 20 years I must still look like a fucking girl!

It’s something that’s been bugging me all week, mainly because I have no idea who this girl was, she wasn’t in my year, she was the year below me. But I don’t remember a lot from school, I don’t really remember people’s names, faces etc because it was such a shit time for me.

Most of the time now I’m stealth, I’ll still get called miss on the phone sometimes and very rarely when I’m out. I am a guy, always have been, so I’m happy I can be out in the world as male. But yeah situations like this don’t make me feel great about myself.

I mean I will never deny my past and my transition etc because its apart of my journey but I don’t want it to be my whole identity. I want to be seen as me, not just for the fact I happen to be trans.

Who I was back then wasn’t really me, I was trying to fit into a world that I just didn’t fit into and I didn’t understand why. I was trying to be someone I wasn’t, I was just trying to do what everyone else was doing. But that wasn’t a true reflection of who I was.

I am more me now then I’ve ever been before, because I am more comfortable in my skin, I’m far more confident then I ever was. I mean yeah I am still on my journey of healing past trauma’s but I know who I am now, I used to feel lost like within myself if that makes sense, but I don’t feel like that anymore.

I know its inevitable I will come across situations like this but its something I hate dealing with, hopefully as time goes by it will stop happening and I can just pass as me and not as who I was before.

I don’t even know where to start right now, once again my heads in a fucking spin! I feel so full of anger and frustration. I really fucking hate my life! Now I’m not one to say that very often, I try and feel grateful for my life. But some days its just fucking impossible to remain hopeful and grateful when there’s fuck all the be grateful for.

The catalyst to all this anger is Personal Independence Payment (Disability Benefits) They gave me 4 points in each component which isn’t enough to qualify for it. You have to get a minimum of 8 points.

I’m sick to death of being ill and I’m sick to fucking death of having to prove it to the cunts that just don’t give a fuck about anyone’s life! Its so fucking soul destroying and it points out every single failing of my life, which is every fucking aspect of it.

I left school with a few GCSE grades, non of them really mean anything now anyway. My highest grade was English…I can’t get anywhere without maths. I have no qualifications in anything, I have no skills, nothing. I feel like such a fucking failure. I have nothing to be proud of other then I’m still fucking alive! Which how I don’t fucking know cuz right now I’m struggling to see the fucking point at all. I’ve done nothing! and no employer is going to employ someone who’s been on the sick as long as I have and no one will want someone who they can’t rely on 100%. I can’t even fucking drive..

I feel like I have no fucking future, no life nothing. Nothing is moving forward, everything is standing still, life is just moving around me. Everyone else is moving forward, I’m still stuck in the same fucking place, all by myself.

I can’t keep doing this bullshit over and over. I’m so exhausted, my heart hurts so much. I’m just wading through mud, not moving forward, just sinking further in.

Its not just job wise, I’ve literally done nothing, been no where. Just been here, doing nothing, just barely existing.

I just want to disappear and stop existing so the pain would just stop.

Just a waste of space..

Well thankfully today I didn’t dive out of bed at the crack of dawn! I woke up around 10 am, so more reasonable then yesterday. I just lazed about on the sofa… Real lack of motivation today. But I had a dentist app and I was off to see L.

Reluctantly I got off my butt, had a shower, got dressed….after trying on like 4 different tops lol! I hate days where nothing looks or feels right. After settling on an outfit, I nipped out with fox and brought her back. I went to the bank and then practically ran up to the dentist… my favourite place NOT! lol. I need a filling 😦 so got an app for that in 2 weeks. He said I got an infection too so I’ve got antibiotics, well I got to take the paper to the chemist first. Ran to the bus stop and didn’t have to wait too long before I was on the bus to L’s.

I got to L’s just before she left for the school run! BOOM! had a cuddle with boo before we headed out to get Mr Harvey. Love that boy, I got him a pirate sword and he just said I have one like this! Hahaha least he’s honest. Got back and played with the boys while L was tidying up and doing the boys dinner. Harvey loves it when I play rough with him! I was trying to talk to him about the voices he hears and that, but he gets a bit shy about it and doesn’t really like talking about it. L said that the other day he was talking to himself but in different accents..and he pushed over Albie and laughed and smiled about it. His appointment at the child development centre couldn’t come soon enough, his bad behaviour is much more then just a naughty child. I really L and Harvey get some proper answers and help. She put the boys to bed, Boo boo went down first and cried himself to sleep as he was fighting it. The Harvey went to bed.

L’s brother finally got to hers after footie training and we jumped in a taxi to town. Got our tickets and food and took our seats. We watched Godzilla in 3D omg it was freaking amazing! and L’s first time watching a 3D film. I hope there will be a second film.

We had a little walk down to the beach. We went to go and see if the ‘monster’ was still down on the beach. I’d seen it in the paper, but I think it was just there for the day. But I got some fab pictures of the stunning moon.

L and I jumped on the bus back to hers, the boys were fast asleep. They looked so freaking cute! I stayed for a little bit as I my bus wasn’t for another half hour. I would of stayed the night, but Sammy pup is being dropped off tomorrow morning and D is coming over early.

I got the bus home, got in about 12:20 am to one very excited puppy dog 😀 We had snuggles and I got licked all over my face lol. I took her out for a walk. She was racing about like a wild thing.

It’s now just gone 2 am and I am no where near ready for bed… My brain is wired! I’m not in the least bit tired. I feel like there is a million things I should/could be doing.

I am so disorganised at the moment. Like I know I have an O.T appointment soon, but I have NO idea when. I’m losing stuff, misplacing stuff. I don’t know when half my apps are, I know I have them lol! Suppose I’ll ring up to see when my O.T app is.

I’m not eating properly. Don’t think I’ve had a proper meal in ages. My appetite is all over. I’m just eating as and when, just grazing really. I keep forgetting things. When I am having a conversation I keep losing my train of thought.. very frustrating. I just feel everything is slowly spiralling out of my control… I just sleep as and when… I really don’t know what’s going on with me. Some days I am feeling depressed, other days my mood spikes right up, then other days I just feel ok, but still can’t do anything if that makes sense… GAH! very frustrated. 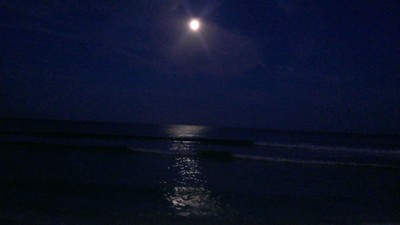 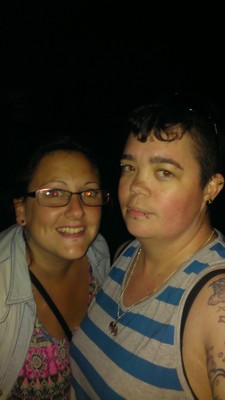 Last night was wicked, again I didn’t get to bed till gone 3 am!

I woke up way before my alarm again this morning! Urgh, but snuggled back up on the sofa and snoozed for a bit.

Then did the usual..shower etc. Took fox for a wee and brought her back.

This afternoon I was at a conference with the youth project and some young people. It was about homophobic bullying and how schools should deal with it. Our young people shared their experiences, they did so well! I saw my middle school teacher there, which was nice. It was over all a good afternoon.

I met my friend D in town, and I went to pick up my lego figures, the shop had managed to swap a few for me! We came back to mine for a bit and had something quick to eat, then it was off back out again to the AGM for work… it was ok, a bit boring!

It’s now nearly 9 pm and I am SO ready for bed. So going to get myself into bed soon because I feel awful and so run down. My voice box is all bruised from coughing so much. I need to sort out my meds for the week, take some much needed pain killers, take fox for a wee and jump into bed!

Oooh I got my watch today 😀 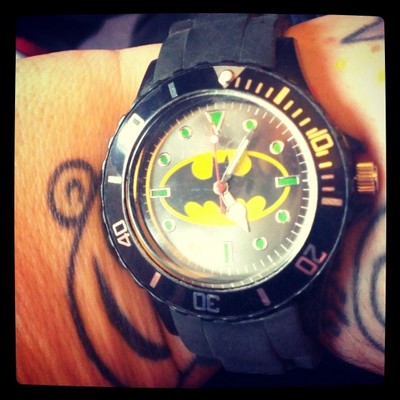